My HivePUD for November 2020

Well, I gotta admit I had been expecting to make this a really awesome post about converting some HBD that I've been saving up over the last several months. I had saved up 22+ of HBD and was planning on converting and powering it all up at once. My wallet before conversion and powerup.

I've earned all of the hive I accumulated. I've never bought anything with fiat money to get started on hive. It's an astounding feeling that I cant even find the words for.

So I hit the convert button with a bit of excitement and... Shit! It takes 4 days to convert HBD to hive? Well there went that idea for HivePUD of November.

You're probably wondering why I have so little hive to power up. Well I have it set, I dont remember where, to automatically take my claims and automatically power up. So I dont have to pay attention to it.

I dont remember how I got so much HBD. But I did go ahead and start the conversion. It will be complete on 11-4-20 and I will then power all of it up if it doesn't do it automatically. 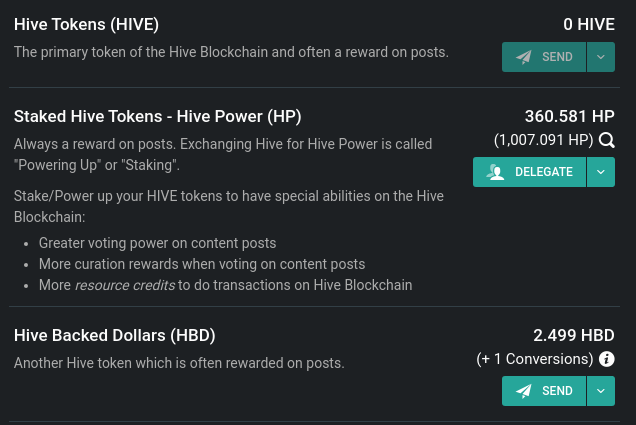 Now that I know the restriction for conversion I will have next months all ready to go before the first of the month.

I'll be doing a lot of posts this week since I'm on vacation this week. So we will talk tomorrow!